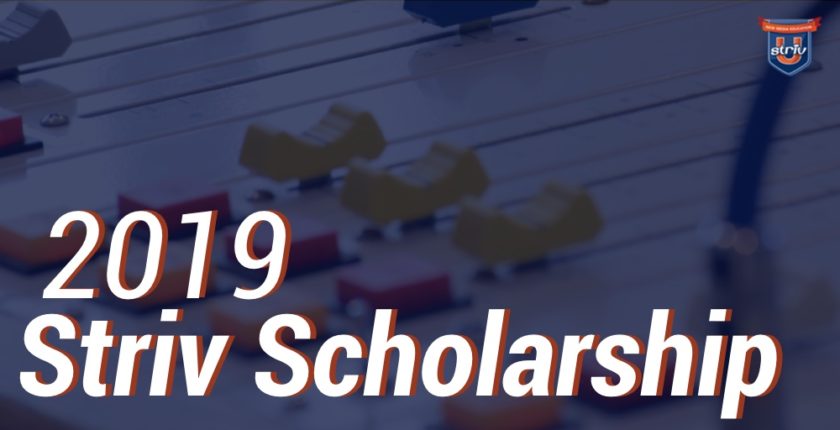 Each year, Striv offers a scholarship to a student who exemplifies what it means to go above and beyond in the classroom, as well as media, and this year’s winner is a tie between Justin Rathbone of Waverly and Nate Thomas of Millard West.

Justin will be attending the University of Nebraska at Omaha (UNO) and majoring in Information Systems.

While attending high school, Justin was a highly involved student. He played 4 years of varsity soccer, took journalism and yearbook for 3 years. He was also involved in the math club and continued to take advanced classes such as Wesleyan Honors Academy, Advanced Publication, and computer science classes.

During his junior year, the principal approached him and asked him to be in charge of social media. It was at that point he realized his passion for media and began creating videos, and visual content for the school. After that the school hired him and he was able to make an incredible documentary film about the football team.

When he isn’t working hard at his academics, Justin enjoys playing video games such as Fortnite, and hanging out with friends. He’s learned that sometimes it’s nice to put the phone down and go enjoy time outside. He challenges himself to learn new things by watching Youtube. In line with his major, Justin enjoys coding and taught himself how to code when he was in the 7th grade.

During college, he would like to have an internship in Omaha and then eventually get a full-time job as a database analyst or a coder. He has the goal of owning his own company where he develops his own software. He hopes to continue to learn hard skills, such as operating a business as well as advanced coding.

However, his main goal in life is to help people.

“Anytime I can help someone complete a task, then that’s a success for me.”

We love it, Justin. Continue to dream big and we can’t wait to see where you land.

Nate Thomas is from Omaha, NE and graduated from Millard West this May. He will be attending the University of Nebraska at Lincoln (UNL) and has decided to double major in Sports Media and Communication, Broadcasting.

While attending Millard West, Nate was involved in journalism for all four years, co-created a podcast called the “Wildcat Wire,” announced games multiple times a week for Striv,  and created and wrote stories for the newspaper where he earned awards for his outstanding work. Outside of school he maintained a part-time job at Hyvee, plays basketball at the YMCA, and is a part of the Boy Scouts.

Nate is no stranger to Striv. He was one of the first students to join StrivU Academy and was quick to dive-in. He attended boys state basketball with us a photographer and even took over our Twitter, and also came with us to State Soccer to do the same. He took professional grade photos and we were lucky to have his help.

In the future, Nate hopes to have a future career in radio. Ideally, that’s his dream job. Eventually, he’d like to make his way up to a leadership role in media. All of his future goals are sports related. He would like to travel to some of the biggest sporting events in the world, including the World Cup, and also the national championships here in the United States.

We love to see his passion for sports broadcasting thrive, and we can’t wait to see him on ESPN someday.