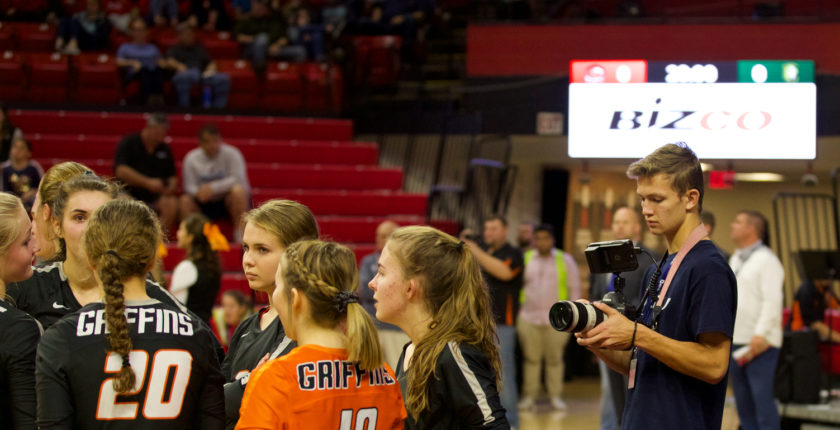 State Volleyball is arguably one of the most anticipated athletic events of the year, for the fans, for the players, and even for us, but each year we try to include our students. This event is widely covered by the media, and over the course of 3 days 42 games are played, and that’s a lot to cover, but with the help of some extremely talented students, we manage to get it done.

A large part of what Striv, and more specifically, StrivU believes in, is that students have the capability and the talent to do important things if we only give them the tools, experience and education. StrivU academy hangs its hat on being able to provide exposure and experience in a real-world media setting.

This year at the tournament, we were joined by Jack Coil – Hastings High, Lindsey Mulder – Elkhorn, Dante Boelhowe r- Adams Central, Kassidy Hudson – Aurora, and Keyara Casper and Katelyn Wilson – Class Intercom Students from Northwest. We also had a handful of media teams broadcast their first-round game, and JCC students on the headset for semi-finals.

Each student was given a role on our media team, complete with press passes, court access, and media room permission. Whether we had them on the court taking photos, helping our Creative Director Ben Mohorn with Video, sorting photos, or sharing graphics on social media, we couldn’t have done the day without them.

At the end of the day, we want our students to be spotlighted for the excellent work they do in the journalism world.

“This experience has made my passion for journalism only grow. It makes me excited for all the winter sports that I can photograph. I learned so many simple skills that I wouldn’t have learned in a classroom setting.” said Lindsey about her experience from the day.

On top of getting students excited about media, we also want them to enhance their skills and abilities with the equipment.

“I enjoyed staying up all night with Ben and putting together the videos for the Championship games. It was cool being able to shoot videos and then turn them around and have people see them the next day. This helped me learn that you can’t even sleep for 45 minutes because you will fall behind on the videos. It also helped me learn some new tricks with After Effects. I loved getting to use all the fancy equipment (although my arms were sore the next day). It’s crazy how a good lens can transform a photo,” said Dante Boelhower, who played a huge role in helping Ben crank out the championship videos.

At the same time, there’s a lot more that goes into sharing a story than just capturing photos and video, and we believe that events like these paint a real-world picture for students who are interested in the field.

“I want to go into some areas of broadcasting and this experience helped me get an idea of what options are out there. You don’t get to hear about the logistics of a game that often and sometimes that’s just as important as who played the best and those are the stories that I like to share,” said Kassidy Hudson.

But at the core, the most important piece is always storytelling. Every good media person should know that behind every good image, every good tweet, every good video, there has to be a story that takes whoever is listening to that place, and at the end of the day if our students are good storytellers, then it’s mission accomplished.

“The thing I enjoyed about shooting at State Volleyball was the atmosphere during the games, everyone playing, coaching and cheering gave everything they had. Telling a story through photography can be understood better by the audience when the atmosphere is something that is hard to recreate or experience first hand,” said Jack Coil.

We are so proud of the students who took a chance to get out of their comfort zone to try something new, and chances are, if you saw any content from us on social media, some of that came from a student that we believed in, and will continue to believe in. If your interested in learning more about StrivU Academy contact sara@striv.tv