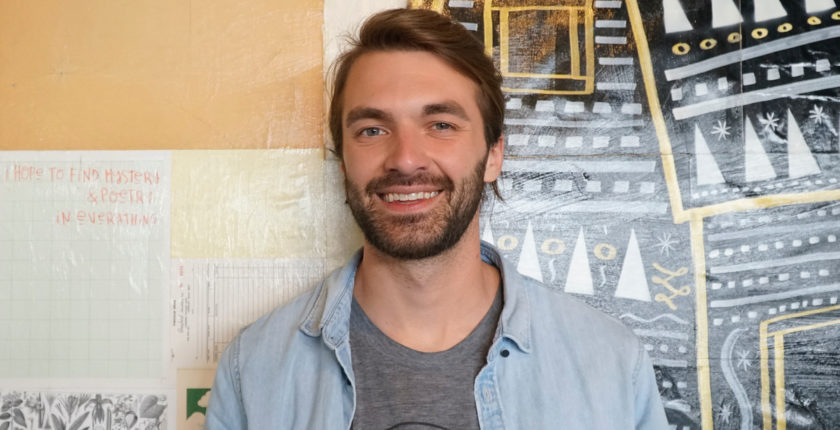 Shayne Pearson was your typical Nebraska native. He was a jack of all trades, doing everything from roofing houses, to contracting, to construction, and even architecture. During his junior year of high school, he quickly realized that based on his skills, he wasn’t going to follow the traditional high school path. He didn’t want the small town glory that comes from being the starting quarterback or point guard of a winning state championship basketball team. Instead, he felt like his calling was to give back and serve the community that raised him.

Pearson grew up in Friend, Nebraska, a small farming town just 40 miles west of Lincoln. He had a supportive family back home who always had his back, and gave him the tools he would need to succeed. They supported him and his love for music when Pearson purchased his first guitar and blared punk music over his stereo as he learned to play, and as he discovered his love for audio engineering. In all of these ways, these small hobbies grew into something much bigger. His thinking was, “If you’ve had opportunities given to you, and you’ve had someone’s shoulder – you’ve got the capacity and the responsibility to start shouldering it for other people… finding those opportunities to give back to the community.”

Throughout high school, he kept his head down and mind focused on the goal. He continued to work on odd jobs as he thought of more and more ideas to help others in need. “I had this realization that I wanted to be in a role to help create opportunities that can help people in a tangible way.” He continued on to college at Southeast Community College in Lincoln to get his general education under his belt before he hit a big-time university, though school never distracted him from helping others. While attending SCC, he worked a full-time job with a Youth Program in York, Nebraska and that position remained unpaid. In the meantime, the handy work he had learned back home was paying off as he landed a side job working nights and weekends helping with the construction of Pizza Huts in Nebraska.

But his inspiration never left his mind, “I wanted to create something meaningful to those who felt they were on the margins or denied opportunities.” So at 20 years old, he finally got the chance to live out his calling for serving others in Nashville, Tennessee where his focus was to relaunch a nonprofit youth program through a church. He figured that moving to this bigger city, would provide new opportunities to help others, and it did. After one year with the nonprofit, he was provided another opportunity to work with People City Mission back in Lincoln, Nebraska for the next three years.

“They handed me the keys to this program, and I cut my teeth on everything from program development, managing volunteers, managing staff, community engagement, tangibles — case management, crisis intervention and prevention.” This was no small feat either. People City Mission was a partnership between three different nationwide programs. It was a safety net, or shelter program, for kids who are homeless or running away. Exactly where Pearson felt he needed to be and could shine, and people were starting to notice.

In 2011, after 4 years of hard work at his craft, Pearson met Mike Smith, founder of The BAY. The two quickly realized that they had similar dreams of creating a tangible space for people on the margins. After hearing Mike’s dream for The BAY, Shayne asked, “What time does open?” and showed up to The BAY the next morning eager to put his talents and passion to work. “It started as a tiny skate park in the mall. It was only 2,000 square feet that kind-of smelled like a locker room.” Shayne described.

It wasn’t long before The BAY moved into a bigger, more dynamic space, to move forward with the many goals they had in mind. Shayne used the skills he developed at his construction job to build their skatepark from the ground up. They built in things like music, art, and dignifying and meaningful human services. Their goal was to teach the younger generation what it means to care for a community and to have the community take care of the people inside of it. Since then, Pearson has always shown up and never left. “We knew our end goal, we wanted a culture of celebrating failure. Hell or high water we were going to get there. So we failed as we went too. Whether that was writing grants, public speaking, or talking to someone at the capital we just googled it and figured it out.” As their team began to grow, they continued working hard to make these goals a reality. Pearson picked up odd jobs to make money while working for free at The BAY, and eventually, the hard work paid off.

Currently, Pearson and The BAY are finding huge success. Pearson is now the Program Director for the organization. They continue to accomplish their goals and have created many sustainable programs.

Recently, their new goals include creating a digital arts program and high school programming, as well as an outreach model and strengthening partnerships in the community. The Digital Art Collective is something they are hoping really to crusade, as they plan to give residencies to artists and have them teach their craft with the students in return. They hope to create a program that allows people to create something meaningful.

For now, Pearson hasn’t stopped pushing his limits either. He is currently enrolled and Nebraska Wesleyan in their advanced program taking classes at night and getting a degree in social work. From there he hopes to get a master’s degree in social work and public administration, but his goals remain the same, creating opportunity and helping in tangible ways. Though as he’s grown so have his goals, now he also focuses on making The BAY a sustainable and operational place for people to go. From his experience, he thinks some of the biggest things he’s learned include figuring out your strengths. Find out what you are good at, and then use those gifts to give back to others. Always say yes, and take every opportunity you are presented with and go for it.

It’s no lie that Shayne is a great role model for those looking to find their purpose. He has proven that hard work, determination to succeed and a passion to give back to the community will carry you far. This Nebraska native is an individual that many are thankful for, and we look forward to watching the future unfold for Pearson and The BAY.

Striving to Create the bay